1926-1949
From prison to the Republic:
the dark years of Sandro Pertini in the letters of his sister 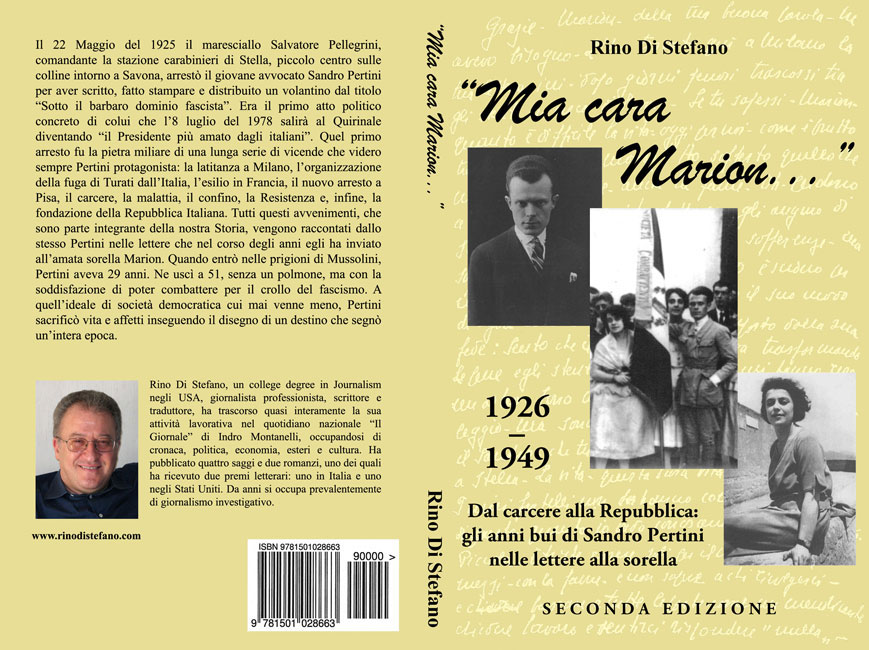 Sandro Pertini, the past president of the Italian Republic in the Eighty, and his unshakeable faith in a democratic world and his strong will to fight the tyrannical fascist regime even with his own life, strongly shows up in the book "My Dear Marion…" (1926-1949) From jail to Republic: the darkest years of Sandro Pertini in the letters to his sister) that I edited and published on 2004 by De Ferrari, Genoa (Italy).
We are talking about a book of feelings and emotions which contents forty letters never published before that Pertini sent to his sister Maria Adelaide, called Marion, during a whole string of events that now belong to the Italian history: the going into hiding of Pertini in Milan, the organization of Turati flight from Italy (Filippo Turati was the president of the Socialist Party during the Twenty in Italy), the exile in France, the arrest in Pisa, the jail, the illness, the internment, the Resistance and at last the foundation of the Italian Republic.
To tell about all the trials and tribulations which forge the young Pertini character, is the same protagonist who confided in his sister speaking with her in his most dramatic events of his own life. As a matter of fact Pertini entered the fascist jail when he was 29 years old and he left them when he was almost 50, sacrificing the best years of his life to the ideal of a better and a more fair world. It was inside the walls of a cold jail that the prisoner Pertini got tuberculosis and lost a lung.
But the illness didn't hurt his proud spirit and at the end of August 1943, when all the prisoners of the Isle of Ventotene were at last released because of the fall of the fascist regime, and Pertini was between them, the future President of the Italian Republic went back home at Stella, in the Liguria region, only for three days. After then he goes back to Rome where enjoys the Resistance against fascist and nazi, and becomes one of the leaders. Two months later he is captured again and this time he will be imprisoned at the German sector of the Regina Coeli prison, in Rome.
But it was not his last hour. Fate decides that he couldn't finish in front of a firing squad and as a matter of fact he was liberated by a military operation made by his own fellow partisans. In those days he fought together with a grenadiers detachment of the Italian Army against the German invaders at Porta San Paolo, in Rome, and in that battle he earned his gold metal to military valor. After the war Pertini will become one of the fathers of the Italian Republic.
The rest is history. On July 8, 1978 Sandro Pertini becomes the President of the Italian Republic "most loved by the Italian people" and his historical figure will stay for ever as a symbol for all his fellow compatriots.
Just for the historical value of this book, I gave all my copyrights to charity for the Department of Pediatrics Surgery at San Paul Hospital in Savona, the Pertini's town. It's just a way to honor the memory of two great Savona citizens like Sandro Pertini and his sister Marion.

On Tuesday, July 11, 2006 the Chinese National Library of Pekin selected the book “My dear Marion...” to increase his international books property. This choice has been made by the contribution of the Italian Ministry of Foreign Affairs to develop the visibility of Italian publishing trade and culture in the world.